A story of the founder of The Irish 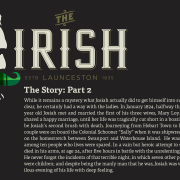 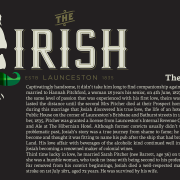 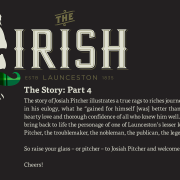 While it may seem our Josiah certainly had the luck of the Irish, being transported out to Van Diemen’s Land to serve a life sentence for felony, he actually proved to be very lucky indeed, given that he was originally sentenced to death. After 172 days at sea with 159 other convicts, (three of whom died) Pitcher first set foot upon Van Diemen’s Land on May 10th, 1819. Josiah was of notably “good character” which contributed to the lessening of his life sentence, and with a conditional pardon granted on October 24th, 1829, he was, for all intents and purposes, a free man.

While it remains a mystery what Josiah actually did to get himself into such a pickle, one thing is clear, he certainly had a way with the ladies. In January 1824, halfway through his sentence, a 26 year old Josiah met and married the first of his three wives, Mary Loy. A delicate flower, they shared a happy marriage, until her life was tragically cut short in a boating accident. This was to be Josiah’s second brush with death. Journeying from Hobart Town to Launceston, the wedded couple were on board the Colonial Schooner “Sally” when it was shipwrecked on 30th June, 1826, on the homestretch between Swanport and Waterhouse Island. He was reported dead, but was among ten people who lives were spared. In a vain but heroic attempt to save his young wife, she died in his arms, at age 24, after five hours in battle with the unrelentingly savage sea. He never forgot the incidents of that terrible night, in which seven other people died, five of whom were children; and despite being the manly man that he was, Josiah was wont to recount this perilous evening of his life with deep feeling.

Captivatingly handsome, it didn’t take him long to find companionship again, and within a year, he was married to Hannah Pitchford, a woman 18 years his senior, on 4th June, 1827. While they did not share the same level of passion that was experienced with his first love, theirs was a practical marriage, and lasted the distance until the second Mrs Pitcher died at their Prospect home in 1845, aged 65. It was during this marriage that Josiah discovered his true love, the life of an hotelier, when he purchased a Public House on the corner of Launceston’s Brisbane and Bathurst streets in 1835. On the 11th of November, 1835, Pitcher was granted a license from Launceston’s Internal Revenue Office to retail Wine, Spirits and Ale at The Hibernian Hotel. Although former convicts usually didn’t wish to acknowledge their problematic past, Josiah’s story was a true journey from shame to fame; he was proud of what he had become and thought it was fitting to name his pub after the ship that had brought him to Van Diemen’s Land. His love affair with beverages of the alcoholic kind continued well into his twilight years, with Josiah becoming a renowned maker of colonial wines.

Third time lucky in love, he married Sarah Pitcher (nee Barrett, age 36) on the 13th of December 1846; she was a humble woman, who took no issue with being second to his profession as licensed victualler. Far removed from his convict beginnings, Josiah died a well-respected man after suffering a severe stroke on 1st July 1871, aged 73 years. He was survived by his wife.

The story of Josiah Pitcher illustrates a true rags to riches journey, but, as mentioned in his eulogy, what he “gained for himself [was] better than silver or gold – the hearty love and thorough confidence of all who knew him well.” It is our pleasure to bring back to life the personage of one of Launceston’s lesser known heroes; Josiah Pitcher, the troublemaker, the nobleman, the publican, the legend.

So raise your glass – or pitcher – to Josiah Pitcher and welcome in The Irish 1835.